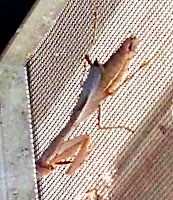 I had an interesting little experience the other day.  It wasn't anything really dramatic, per se, just different.  I was sitting outside on our patio at home and noticed this Praying Mantis hanging on the window screen.  It is still sitting there today!  I thought to myself, "Doesn't this thing have anything more to do?  I mean, come on!"  It just sits there and sits there "doing" nothing.

At least, that's how it appears.

In reality, it is sitting there waiting for it's next meal.  It waits patiently knowing that some unlucky, unsuspecting bug will indeed cross its' path.  And when it does, "SOUP'S ON!!"

But here's what I learned.  This little "bug" of a predator sits patiently with it's front "paws" in a cupped position as if praying.  And the Lord sort of told me that this is how I should be.  Ever in a position of prayer WITH expectancy.  2 Chronicles 20:17 says, "You will not need to fight in this battle.  Position yourselves, stand still and see the salvation of the Lord, who is with you, O Judah and Jerusalem!  Do not fear or be dismayed; tomorrow go out against them, for the Lord is with you."  All they had to do was be still.  But notice something: If all they had to do was to position themselves and stand still, why then were they told to go out against them?  Last time I checked, that didn't quite look like standing still!

Here's the deal.  What the enemy wants us to do is to become so busy trying to find a way to win a battle, when the battle has already been won.  Jahaziel, the one who prophesied this to the children of Israel, was telling them to still their hearts, minds, and souls, and watch as God fights for them.  Their positioning of themselves put them in a place of being able to see the victory that was theirs in God.  It wasn't necessary for them to come up with a battle strategy or to fear defeat, but instead to STAY in the place of KNOWING, BELIEVING, AND CONFIDENT EXPECTATION of the hand of God fighting on their behalf.  They were told not to be afraid or dismayed because God was going to take care of this enemy.  And also, notice he said to stand still and SEE.  The enemy wants you to ONLY see the challenge set before you.  He doesn't want you to see the victory that is yours in Jesus, for Jesus came to "destroy the works of the evil one (1 John 3:8)".  These are God's chosen people and nobody was going to succeed in devouring them if HE had anything to say about it.  Guess what?  You have been grafted into this chosen-ness (Romans 11:17-18).  This means that the same passion that He has for His chosen ones, He now has for YOU.  That being the case, you, too, can have the kind of expectancy and trust that the children of Israel were instructed to have.

Matthew 6:30 says, "If that is how God clothes the grass of the field, which is here today and tomorrow is thrown into the fire, will He not much more clothe -- you of little faith?"  And verse 34 says, "Therefore do not worry about tomorrow, for tomorrow will worry about itself.  Each day has enough trouble of its own."  In other words, POSITION YOURSELVES in confidence, faith, trust, and belief in the God who fights for you.  SEE yourself victorious because of what He has done for you and will do for you.  This He will do so that His name may be glorified in you.  What is it you need?  He knows and is able to provide for you.  The enemy would have you fully embrace fear of "what if" or "how will," but God wants you to fully embrace His "I have," "I will," and "It is written," for 2 Corinthians 1:20 says, "For all the promises of God in Him (Jesus) are YES and in Him AMEN, to the glory of God through us."

The enemy wants you to run away from this.  Why not today, RUN TO IT?  There is nothing left secure to stand upon.  The only thing certain for all eternity is God and His word that is forever settled in heaven (Psalm 119:89-90).