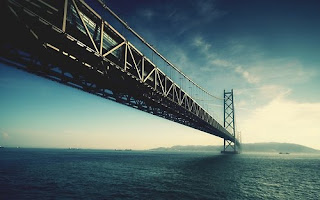 At the time of this writing, I am on a plane heading home to Jacksonville, FL from Cincinnati, OH. We had an incredible time of worship this weekend, though not without it's challenges. One of the venues had issues that were out of our control, but affected what we do very directly and had to be overcome. Praise be to the Lord for bringing us success. God's presence was strong and powerful in our midst an many were blessed. At another venue this weekend, we were faced with exceptionally few issues and were even more free than before to enter into the presence of the Lord. That got me thinking.

Each time Paul and I go out to minister, there is always a sense of assignment that we feel. We know the Lord has called us to the place were we're going and that he has already prepared the way. That causes there to be great expectation and confidence in Him to accomplish exactly what He has declared for us. However, issues in the natural plague and attack our flesh all the time, causing us to potentially lose focus on what He has assigned for us and what He has declared and to instead focus on the problems coming against us. Once that happens, there is a battle that ensues and we must now fight to regain our stand in the Lord. But if we STAY focused on what God has declared and on what He has assigned for us, we will be better equipped to remain in position to be used by Him to accomplish His plan.

Case in point: Jesus declares to His disciples, "Let's go to the other side.". They all got into the boat and started across the see. As they went, Jesus went to sleep. But in the midst of the journey, the storm arose and the waves began to beat upon the boat. The winds began to blow increasingly and toss the boat around on the water. However, Jesus remained asleep until His disciples woke Him and asked Him, "Master! Don't You care that we Re perishing!?" Jesus rises and rebukes the storm and the waves and then turns to His disciples and said a most curious thing: "Why is it that you have no faith?"

I've heard it taught that Jesus was telling them that THEY had been given authority to calm the storm. And though I do subscribe to that thought to a degree, could it be that it was something much simpler than that?

The point is this: Whatever God has declared over your life, put your TOTAL confidence in His word because it will SURELY come to pass exactly as He said. Understand that there will always be opposition to your stand for God and for the Kingdom, but if we stay in our position of victory regardless of experience, if w fight to hold on to what we KNOW God gas told us, we will see our God-given purpose become a reality.

Press forward toward that which God has declared, but leave the fulfillment of His word in His hands. You and I are not big enough, strong enough, wise enough, ANYTHING enough (smile) to make it happen. We do what is before us to do and watch Him be faith to "complete that which He has began in you."